Claude’s Commentary No. 64
By Claude Hall

A great while ago, I was en route from Los Angeles to Miami and what better chance to interview Gordon McLendon, right?  I was picked up at the Dallas airport by Bart McLendon, now a multibillionaire “chauffeur.”  He was very pleasant.  And so was Gordon.  He maintained an office in the building where he also operated a movie theater on the ground floor.  I believe that his FM station was also in the building.  I sat across his desk from him while he nibbled at a sandwich and, I think, a glass of milk.  It was a good interview and I appreciated Gordon giving me the time.  I believe I printed it in installments in Billboard.  I intended to feature it in the second volume of “This Business of Radio Programming” but, sadly, that book was never to be.

What surprised me – his answer -- was when I asked Gordon who was the best radio man, in his opinion, among all of those who’d worked for him.  I personally knew many of them and admired immensely such men as Bill Stewart, Kent Burkhart, Art Holt, Chuck Blore, Don Barrett, Ken Dowe.

Don had earlier left Gordon McLendon to operate his own radio station.  That will ordinarily irritate someone of the business stature of a Gordon McLendon.  Anyway, I’d been expecting him to mention the name of Bill Stewart.  But, no, the best radio man who’d worked for him, among hundreds, was Don Keyes.

I talked with Keyes once or twice on the phone.  Nice guy, but not particularly impressive to me.  Bill Stewart, I knew well.  And I considered Bill Stewart a brilliant radio man.  Both L. David Moorhead, known for founding KMET-FM in Los Angeles, and George Wilson, who created WOKY in Milwaukee into a Top 40 icon, told me that without Bill Stewart, there wouldn’t have been a Gordon McLendon or a Todd Storz, the owner of KOWH in Omaha, without question the world’s first Top 40 radio station.

That was a damned good interview.  It’s a pity that volume II never came to be.  I had interviews with Gordon McLendon, M.G. Kelly (whatever happened to him?) and Jimmy Rabbitt ready to go.  Ah, the books that I never got around to writing!

OTHER MATTERS
Jim Slone:  “Saw Don Rickles tonight on Letterman ... boy has he faded ... he just had his 89th birthday ... Howard Stern was on and hogged all the time interrupting and being obnoxious ... I can't stand that guy, never could ... pathetic, crude, vulgar guy ... shows what our culture has come to for him to be the highest paid media star there is (according to what Letterman says).”

I sincerely doubt that Stern is the highest paid anything.

Hal Smith:  “Your comments about Mark Twain brought back some memories.  Sue and I visited his newspaper office in the basement of a building in Virginia City, Nevada, a couple of years ago.  As a kid I was also a fan of Jack London.  I enjoy your weekly posting.  Keep 'em coming.”

Don Imus noted the mention of a new album by Jimmy Rabbitt in last week’s Commentary.  Don Imus:  “If Jimmy will send me his album I would probably play it.  I am NOT going to buy it.  I've been around a while — I can't recall ever giving anybody any money for the privilege of playing their record.”

So, I quickly sent Don’s address to Jimmy.  This sort of thing makes me proud to know Don Imus.  Don, incidentally, sent an early version of “Hellmakers” to his agent for me.  Unfortunately, she didn’t like it.  Cry, cry.  Having friends is a great thing … even if they can’t always help out.

Rich “Brother” Robbin:  “Claude:  just a few words to tell you how much your ‘over-the-back-fence’ chat-blog means to so many of us.  Keep up the good work, ol' trooper ... you've got a lot of friends who love you including me!”

Thank you.  It’s sorta nice to know who’s reading Commentary.  I’m sending it out to about 500 – perhaps a bit more – but there’s no way I can tell who’s reading it or not.  A note now and then cheers me up.

Diane Kirkland:  “Looks like the photos got taken out when I answered Chris Petersen’s emails ... but I’m sure he’d be glad to send you the photos.  He has guitars signed by The Eagles and other notables, photos, etc. etc.   Everything you can think of.”

Diane, I saw the pictures.  His collection – just fantastic -- will more than likely end up in a museum one of these days.  Thanks for letting me see them.  I’ve never seen such an extensive collection in my life.  How did he manage to get backstage to meet all of these acts?

This is one of the three sons of Bobby Vee.  All are musicians.  Robby has his own band and plays throughout the mid-west.  I’ve known the boys – and daughter Ginny, too – since they were pumpkins.

Don Graham reports that Bobby Hart is the subject of a new documentary film called “The Guys Who Wrote ‘Em.”  Hart recently authored the book “Psychedelic Bubble Gum.”  Good on you, Bobby!

Mel Phillips:  “Got a couple of questions for you.  I met Mickey Addy when Billboard had the convention in New York in the 70s.  He was quite the Broadway Danny Rose character.  I think he had tails on, a top hat and a monocle covered one of his eyes.  Did he always wear the monocle?  I had always heard about them but never saw anyone actually wearing one until Mickey. And what the devil did Mickey do at Billboard?  Also, don't know if you were still at Billboard when the video column was written by a woman named Diane Tameecha (dyin' to meet you).  Her byline had a picture but it looked like it may have been a put on. Do you know who wrote under that name?”

There will never be another Mickey Addy, a man I loved dearly and a character and a half.  He worked in sales for Billboard.  This was after he retired as a promotion man for Dot Records.  Heck, everyone one loved him!  We took him to Nashville one year and he costumed up.  I’m sure all of the newspaper people in town knew who he was (our country music editor at the time was Bill Williams and Bill had been a newspaper man and knew everyone in town).  However, Mickey Addy, in costume, had pictures in the paper, in color, and articles galore about being a count.  Fun.  Mickey was writing a book about the music industry on cassette.  His view.  He thought of Frank Sinatra as “that young punk.”  Mickey said he’d dictated several cassettes.   Tommy Noonan of Billboard was a close friend of his.  After he died, Tommy was one of the first into the apartment.  No cassettes.  The lady you mentioned, Mel, was after my time.  Sorry.  I may write more about Bill Williams in a coming column.  Audrey Williams, no relation, threatened to kill him.  Must have been something he wrote because he was a quiet, unassuming person.  Okay, guess I’ll tell the tale now.  She finally caught up with Bill in a nightclub … couldn’t find her gun in her purse so she threw the purse at him, drunk … Bill picked her up and drove her home and put her to bed.  As I said, Bill knew everyone in town and every story.  He died one afternoon at a little league baseball game watching one of his kids.  I guarantee you, he was more than likely the best country music editor Billboard ever had and that includes Bill Sachs, once magic editor of the magazine back in the day.  Someday, they might write the real Hank Williams tale.  The movie, I understand, had too much of the touch of Audrey … wasn’t real.  Or, at least, not always.

Bob Sherwood:  “Regarding the passing of Stan Cornyn … he was one of the most creative people I met in nearly four decades in Broadcasting and the music business.  And a charming raconteur.  Another truly great one that the current generation wouldn’t/couldn’t understand and absolutely couldn’t replace.  As with Lee ‘Baby’ Simms -- someone who’s like we won’t see again.”

Lord, but I miss Lee Baby Simms and George Wilson.  I haven’t written much lately on the novel “George.”  Still toying with my Kindle.  Currently reading a Max Brand.  Having a ball!

This from Don Sundeen, www.thedonrocks.com: “Stan Cornyn used to sing drum solos to his dates.  Really.  Now maybe it’s me, but I think any man who can cop the snap of a snare with his mouth is probably more than capable of capturing the rhythm of the nation with his words.  Cornyn, who spent the lion’s share of his career at Warner Brothers, has written a book called ‘Exploding: The Highs, Hits, Hype, Heroes and Hustlers of the Warner Music Group’, and if you’re in the record business, or ever were, or want to be, or are interested in how music, media and money has impacted our society over the last 50 years, it’s a must read.  No, I’ve never talked with Stan Cornyn personally, but after reading his words late in the night for two days straight, I believe I’ve heard his voice.”

B.B. King has died.  Great, great guitar player.   He will be missed.  Just FYI, both King and Santana supposedly live/lived in Las Vegas.  I really admire Santana.  Wish I could meet him.

More Bob Sherwood:  “Obviously he was much more than ‘The Thrill Is Gone’ but that’s what B. B. King will always be for me.  I think that the track and the single were almost perfect recordings.  It’s one of a select number of records that I never tired of playing on air -- year after year.  The pure passion and emotion in his voice is rarely duplicated and the exquisite purity of his glorious playing on the intro, the bridge and the outro is only approached by Carlos Santana on his classic ‘Europa’.  We were blessed to be around to enjoy his gifts.  I suspect there’s another ‘King’ in Heaven. Or, at least on the way.”

Devon Wendell:  “Here's my very personal remembrance and tribute to B.B. King.  https://irom.wordpress.com/2015/05/15/an-appreciation-remembering-the-king/  I hope all is great.  I Love your blog!!  Thanks for including me!!!”

I value your work immensely, Doc.

Jon Scott:  “Wanted you to know how our 3rd Music Industry Reunion went here in Los Angeles – GREAT.  More than 275 music industry figures, past and present, filled the Sagebrush Cantina. The party was incredible and the camaraderie of the music industry is amazing.  The night was a virtual hug-a-thon, as people came together from all over the country for this party with one common bond -- a passion for music and to see longtime friends.  Legendary record executive and industry trendsetter Russ Regan was presented with the Music Reunion’s first Lifetime Achievement Award.  Look for another Music Reunion in 2016.

Great on you, Jon!  I treasured, in the day, knowing all three of these men.  Record men of the first water. 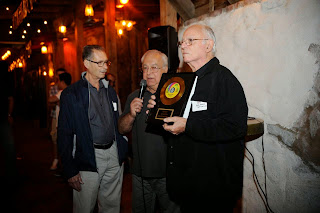